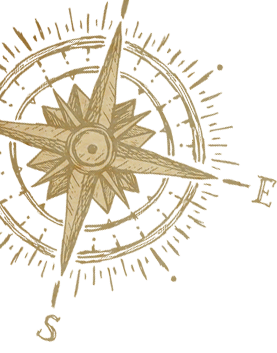 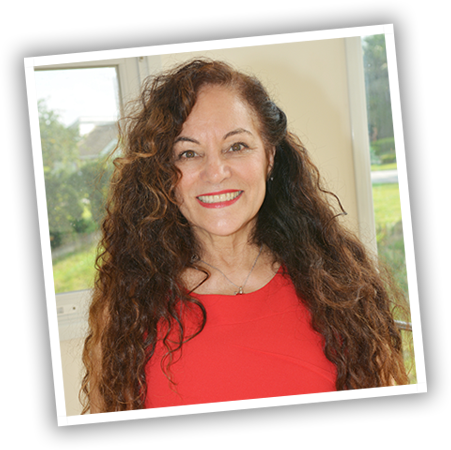 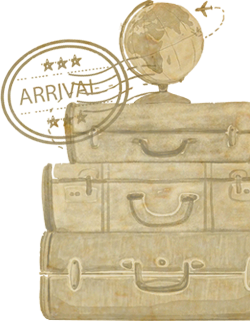 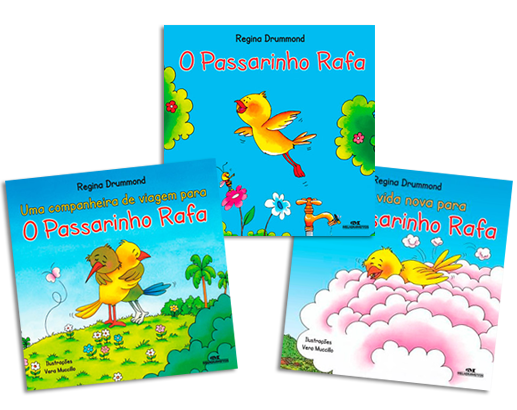 They are 3 books but each one can be read separately. The first one is the best seller of Regina Drummond and after 30 years is still a success.

Raphael the little bird  book 1
The first one shows the baby Raphael protected by Juliana and Lilian, his owners . He discovers the world is much bigger than he can see and he wants to be free of his cage but he is still too small. He tries to flee, but he falls down and breaks his wing. Finally, the girls accept he lives on the trees, but close to the their house.

Raphael has a new life  book 2
In the second book, he discovers the pollution and wants to know more about the world. He convinces the girls that he has the right to go far away. Raphael is astonished with the things he sees and can't understand how selfish men can be.

Raphael met a partner to travel with him  book 3
In the third book, Raphael goes leaves by himself and meets Beatrice, a very clever colibri-female, who teaches him things about the world. Together, they decide to help nature and invite all the children within the world to take care of it.

Raphael, the Little Bird
(in full) 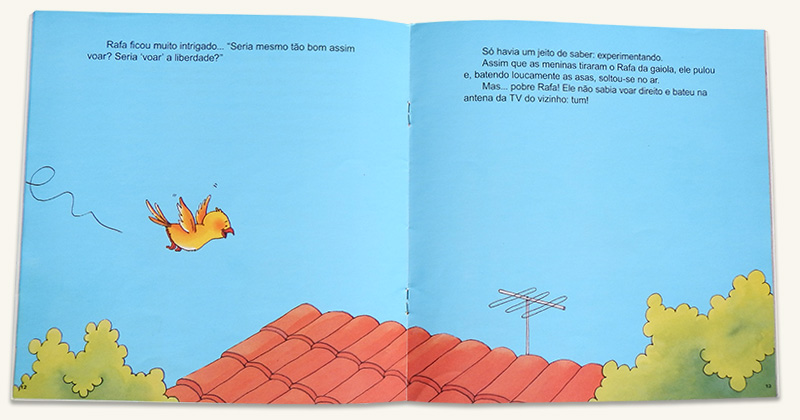 Page 5
Uncle Ranulfo has given a little new-born bird to Juliana and Lílian. They have called him Raphael and bought him a golden cage. Both sisters have been around him all their free time, petting him and delighting with his jumps and peeps. "Pi, pi, piu!"
Raphael's song was so beautiful!

Page 6
When he grew up a little more, Uncle Ranulfo began to teach him to stay over the girls' fingers and shoulders, fly very low in the garden and become goody-goody when he was caressed. As Raphael had been born within the cage, he believed the world was only that garden where he lived.

Page 7
Every day, early in the morning, Raphael used to wake up Juliana and Lilian:
"Pi, pi, piu!"
"Good morning, good morning!", they cried, getting up immediately.
The first thing they did was cleaning the golden cage and changing the water and bird seed.

Page 8
When the sun was shining, they used to put the cage in the garden; but when it was cold or it was raining, they took care he was comfortable and warmed. Raphael was very happy with them.

Page 9
However, one day, he thought:
"What can have at the other side of that wall? And over there? The sky is so blue, the blue is so beautiful and the flowers either. They must be very small when seen from the height.... Are the trees high, when they are seen far from here?"
And Raphael wanted to see the things from the height.
Raphael wanted to fly.

Page 10
A sparrow was layin down next to the cage and Raphael asked him:
"Hey, friend, is it good to fly?"
"Good?", smiled the sparrow. " It's wonderful! But you are a bird, how don't you know it?"
"I was born in the cage. I've never flown. My owners told me that it's very too dangerous to go far from home, that it has hawks which eat little birds, that it's very difficult to find food, that it's very cold and it rains and that it's better to stay here, because they take care of me."

Page 11
The sparrow was astonished:
"What a awful life you have!"
"Awful ? You're crazy! I live in a golden cage , so beautiful that it seems made of gold. They love me. I have..."
The sparrow interrupted him:
"You are a prisoner. A golden cage is always a cage. I was already hungry and felt cold, but I'm free. I learnt to defend myself, alone. And do you want to know what I think? You're boring! I'll go away. Bye, bye."

Page 12
The sparrow went away, and Raphael became puzzled. Would it be so good to fly? Does freedom mean "flying"?

Page 13
There was only one way to know that, trying.
As soon as the girls opened the door of the cage so that Raphael could fly low, he jumped and, he flew away, free in the air.
Poor Raphael! He didn't know to fly correctly. He became tired, was confused and crashed into the neighbour's antenna: bahn!

Page 14
The girls crie, thinking he had died.
Fortunately, he had only broken the left wing.

Page 15
"I think Raphael isn't happy anymore, girls", said Uncle Ranulfo, putting a bandage on the broken wing. "Let him fly a little more. In order that he doesn't flee, what about tying a string on his leg?"
And that was done.

Page 16
However Raphael has never been happy anymore, as he had been before. His dream was to reach the sky and fly, fly, fly...
He decided to train to make his wings stronger.
When he felt he was ready, he cut the string which was clipping him and escaped, hearing Juliana's cries:

Page 17
"Come back", Raphael! Come back! You will hurt yourself again, Raphael, come back..."
He didn't even care . The air he was breathing there was blue an sweet as the sky, making him feel drunk with such an emotion... Suddenly, the world became so big, making him feel numb...

Page 18
"Here is my place!", he cried. "I don't want to live within a cage anymore! I'm a bird!
And Raphael flew, and glided, and ran ashore, and went up and down and it was unbelievable the delicious madness he was feeling...
After flying for a long time, resting on the trees, pecking at the fresh fruits and being confused within the blue sky, Raphael began to miss the girls. He still heard Juliana crying desperately:
"Come back, Raphael, come back!"

Page 20
"But, Raphael", cried Lilian, "who will awaken us in the morning? Nobody sings so beautiful as you around here!"
"Pi, pi, piu! I promise you, girls, I promise I will awaken you every morning, but let me be free, please!"

Page 21
They understood: they stopped crying and put the cage away, into the trash.

Page 22
And, then, every morning, in the early hours, Raphael sang to make the girls get up.
"Pi, pi, piu!"
They got up:
"Good morning! Good morning ! How are you, dear Raphael? Have you had a good night?
And they put water and birdseed at the window for him.

Page 23
And with great happiness, they told their friends at school:
"We have a little bird whose name is Raphael, don't you know? But he isn't closed in the cage, he lives in the sky and every day he visits us..."